Ther’s a ton of articles about Facebook ad optimization.

That’s not very helpful, is it? 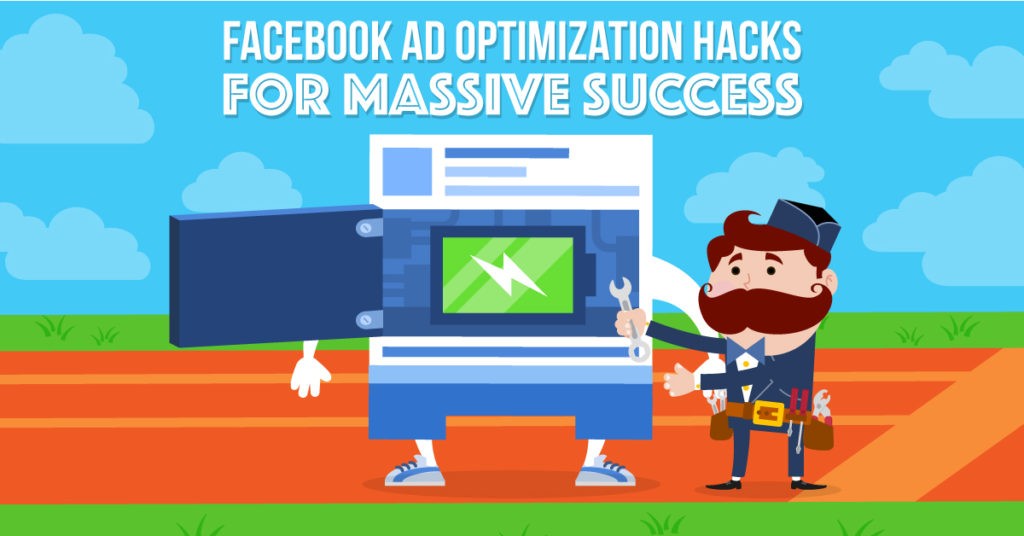 Optimization implies that your campaign outcomes will improve as a result.

It is among the key things that separate the successful unicorn ad campaigns from the rest.

This article is about the Facebook ad optimization hacks that really help you take your campaign to the next level.

Let’s get straight to the point, in this guide you will learn how to:

Sounds like a difficult promise to keep? That’s because it is.

If you want to reach all your target audience members and outpace your competition, you’ll need to optimize your campaigns both before and after publishing them on Facebook.

The good news is that this time and effort will be worth your while.

So what are these 10 powerful Facebook ad optimization hacks I’m talking about?

Read on and find out!

The likes and shares under your Facebook posts (and ads) are a pure form of social proof. If others like the ad, it means the product must be pretty good.

When setting up a Facebook ad campaign, you’ve got two options, the default being: create new ads for every ad set and campaign.

However, it’s an incredibly efficient way of optimizing your ads’ likes and shares.

The “Use Existing Post” gives you the opportunity to gather all the campaigns’ post engagements under a single ad.

If you’ve been wondering how some advertisers have hundreds or thousands of likes under their Facebook campaigns, chances are they’re using the same optimization hack. 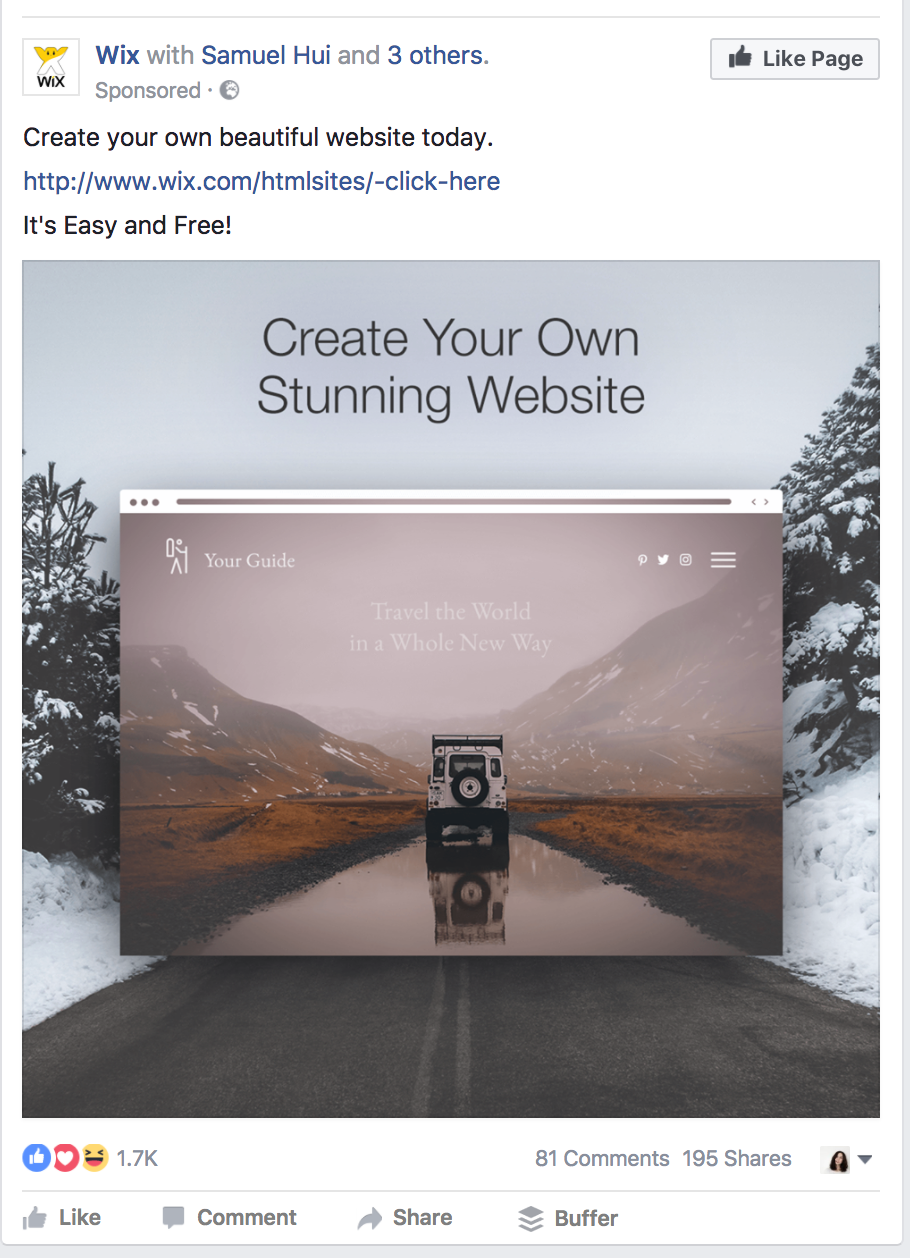 Next, you can select this post every time you’re setting up new ad campaigns or new A/B test variations.

2. Use the FTO (fast take off) method

Sometimes, it can take a couple of days before you have enough campaign results to start optimizing.

Especially when you’re working with small budgets, the campaign take-off can take some time:

That’s why I like to accelerate the optimization process by using FTO (fast take off) tactic.

Here’s how the FTO method works:

However, keep in mind that you need to give Facebook at least 24 hours to adjust the performance of your ads after every new edit.

Every time you make substantial changes to your campaigns, consider waiting for at least 24-48 hours before drawing any conclusions.

Are your Facebook campaigns running 24/7, reaching the target audience regardless of the time or weekday?

When analyzing Facebook ad accounts, I’ve noticed that there are always some days and hours that outperform the rest.

To see which weekdays contribute to the most conversions at the lowest CPA, go to your Facebook Ads Manager reports and use the Breakdown menu to break down your campaigns by Day. 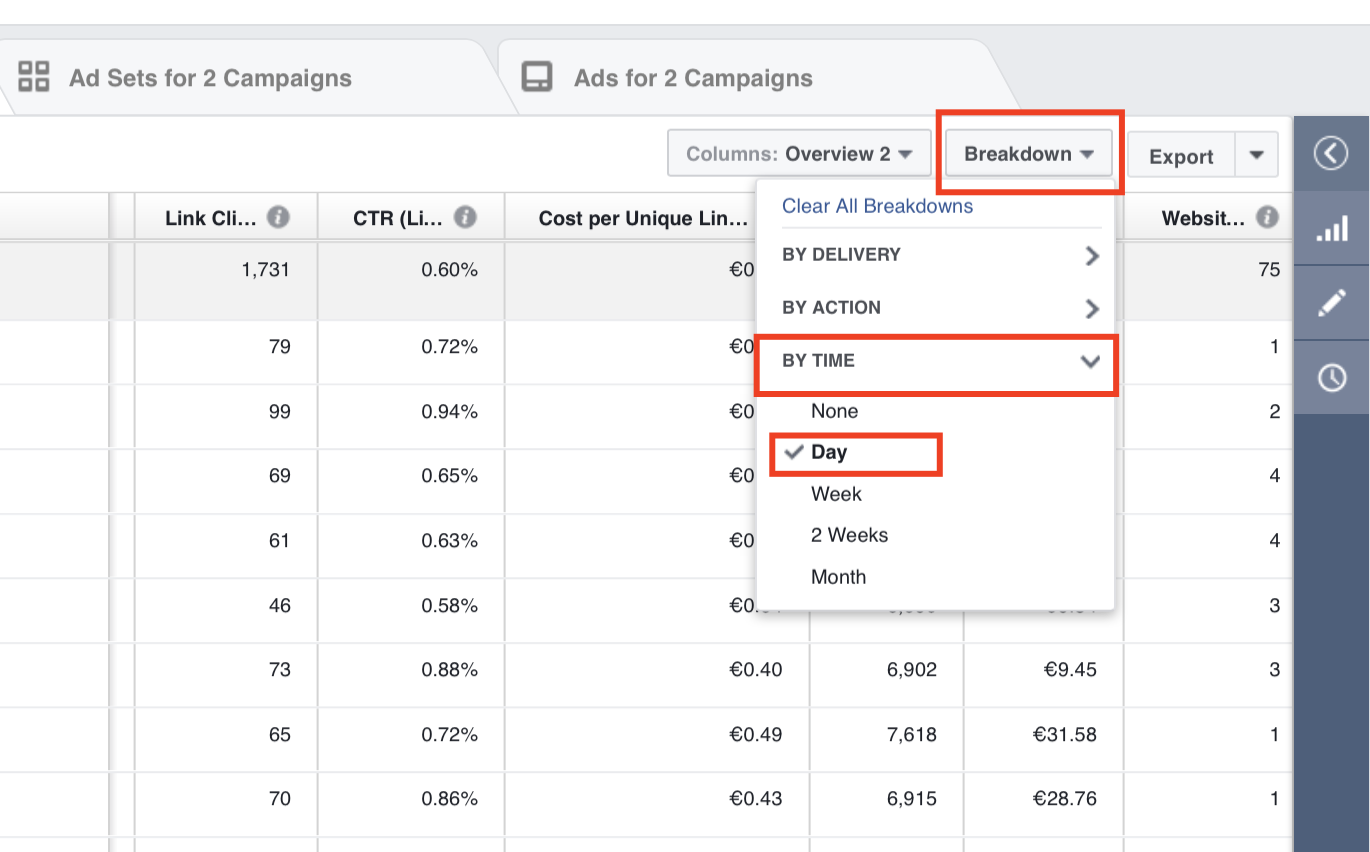 You can use the performance data from multiple Facebook campaigns to discover the best time for advertising.

Next, you can set your campaigns on a custom schedule, so that you only reach your prospects at the time with the highest potential. 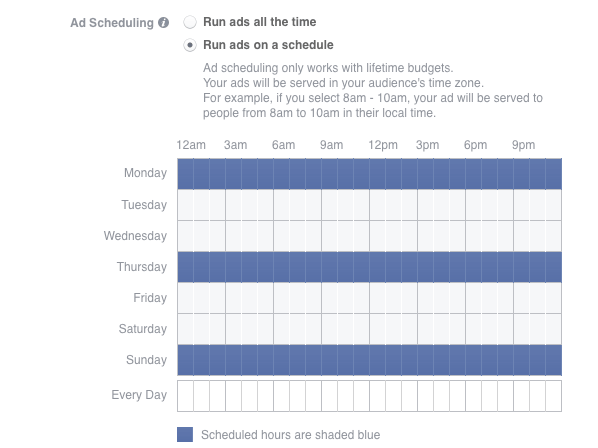 Another reason to keep your ad campaigns on a custom schedule is to decrease Ad Frequency – people will see your ads less often, and won’t get bored with them as quickly.

AdEspresso did an analysis on how ad frequency affects the click-through rate, cost-per-click, and cost-per-conversion of Facebook ad campaigns. Here’s what they found:

The more people see your ads, the more bored they’ll get. 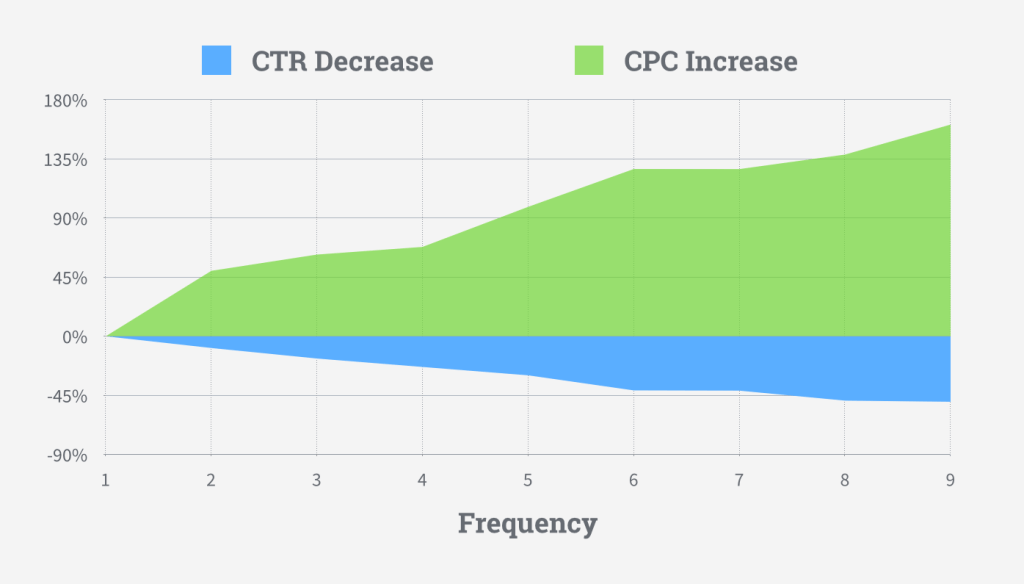 This means that after your target audience has seen your Facebook ad for four times or more, the cost-per-click will increase significantly.

So how can you optimize your Facebook ad campaign to avoid people getting tired of your ads?

This way, people will see a different ad every day and your ads won’t seem repetitive. 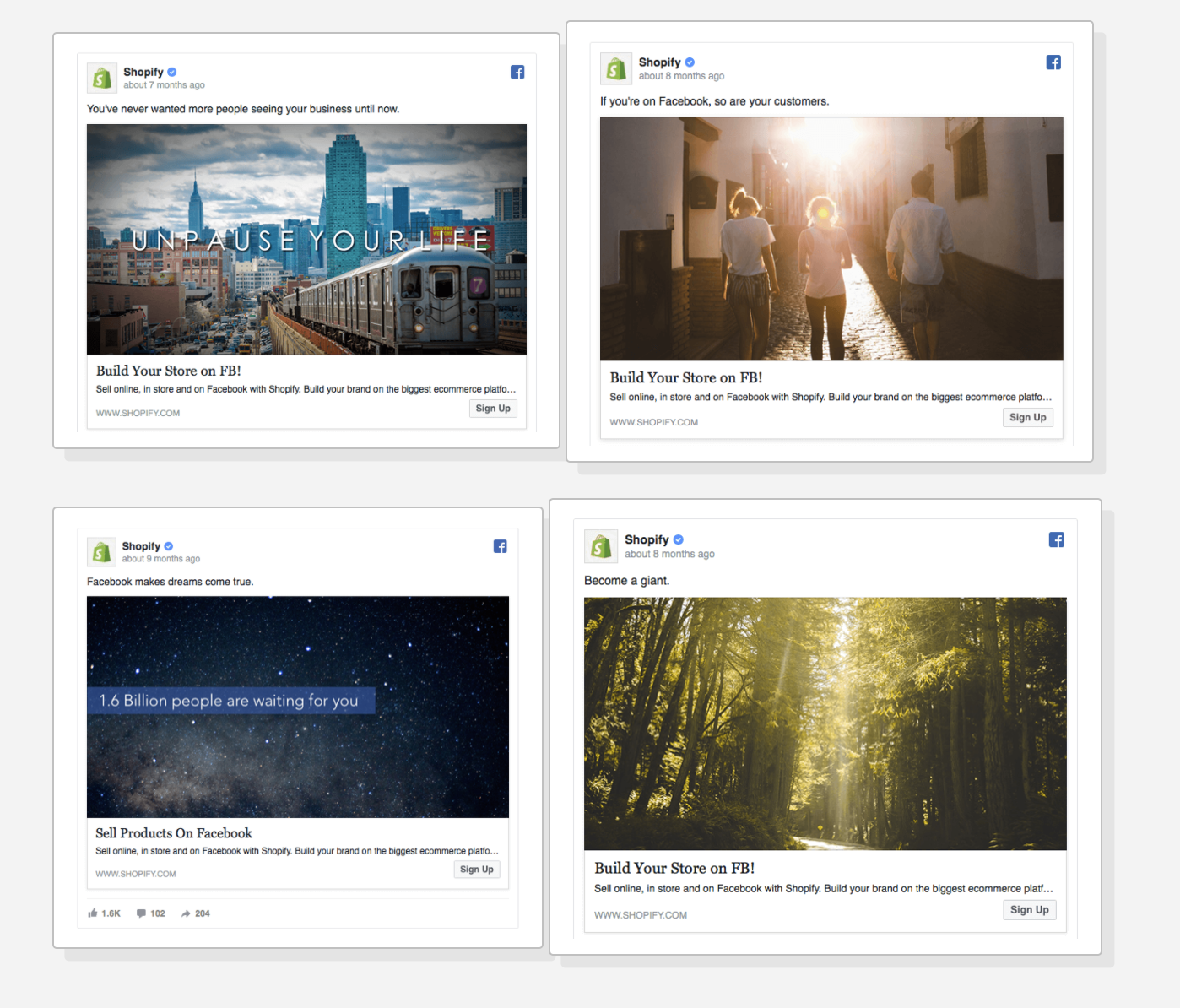 In that case, people may see your ads a couple of times per day, meaning you should take extra care not to display a single ad creative over and over again.

So much so, that according to AdEspresso’s data, the CPC can vary over 550%, depending on different ad placements. 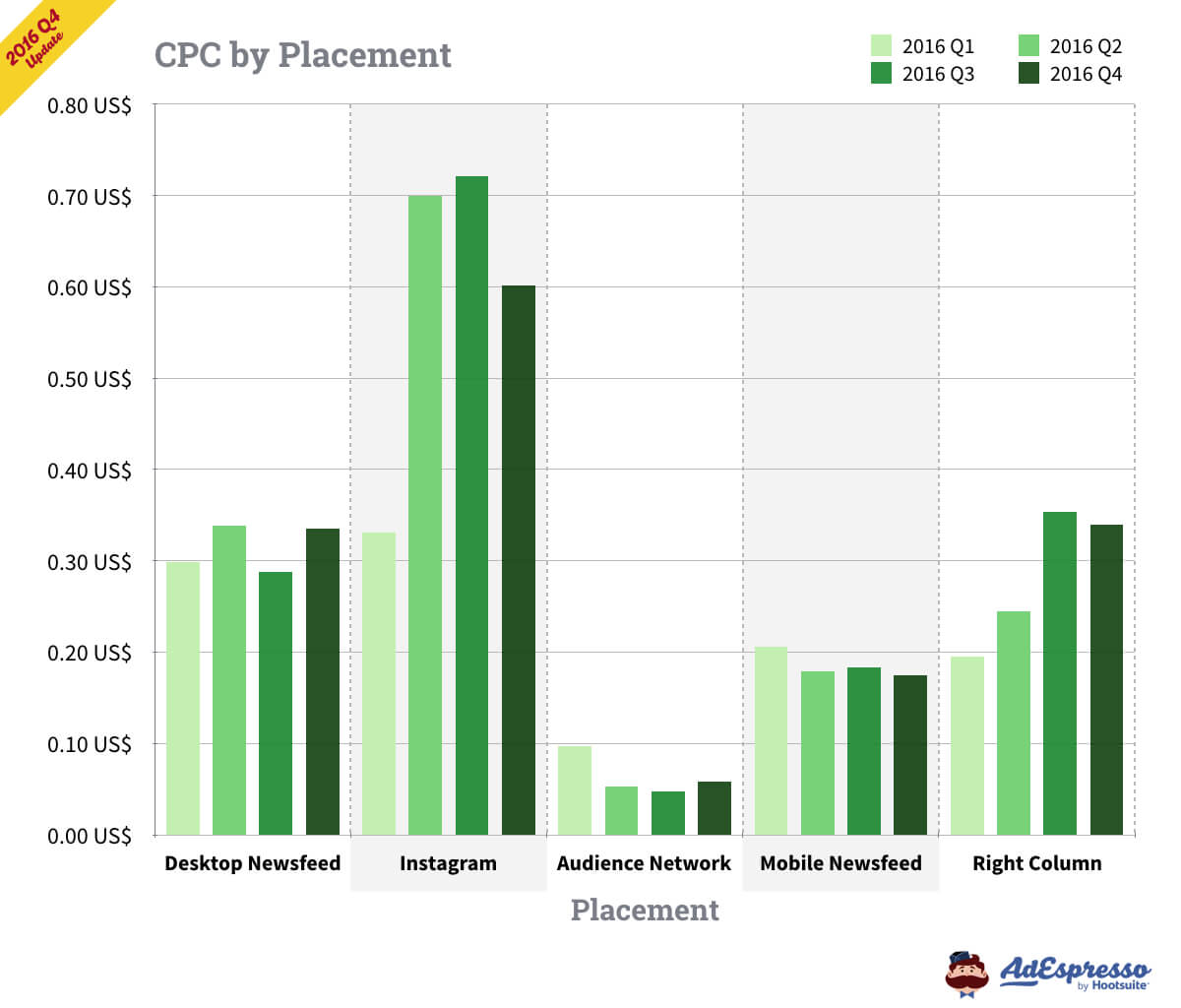 To uncover your top-performing ad placements, log in to Facebook Ads Manager and use the Breakdown menu to break down your campaigns by Placement.

After you’ve discovered your top-performing ad placements, go ahead and optimize your campaigns accordingly:

One of the key parts of Facebook ad optimization is finding out what works.

And what better way to discover new best-performing ad creatives, messages or audiences that running a quick Facebook A/B test.

However, you shouldn’t A/B test everything.

When searching for Facebook ad A/B testing ideas, think which ad element could have the highest effect on the click-through and conversion rates.

I recommend that you start by testing your:

Many Facebook advertisers make the mistake of testing too many ad elements at once.

For your experiment results to be relevant, you need to collect at least 100 conversions (i.e. clicks or leads) per variation before making any conclusions. Even better if you can wait until you have 300 or 500 conversions per variation.

When working with small advertising budgets, waiting for so long can be pretty frustrating.

2. Take the winning ad from the first test and expand on its variations in the next Facebook A/B test.

This way, you save the time and resources you would have spent A/B testing multiple variations of all your initial ideas.

As you set up a new Facebook ad campaign, the first selection you’ll have to make is choosing the campaign objective.

The campaign objective tells Facebook what’s the ultimate goal of your advertising campaign, and helps its algorithms optimize your ad delivery for best results.

So basically, you’re telling Facebook how to auto-optimize your ad campaign.

It is critical that you select the right Facebook advertising goal during the campaign setup process as it will determine your ads’ delivery and cost-per-result.

But how can you know which one of the 10+ campaign objectives is the right one?

Always choose the campaign objective that matches your advertising goals.

This way, Facebook will know how to optimize your campaign’s reach and ad delivery.

9. Exclude “converted” from your target audience

Another way to expand your campaign’s reach without breaking the budget is optimizing your Facebook target audiences.

It doesn’t make sense to keep delivering the same ads to a person who has already converted on the offer. These leads should be moved to the next stage of your marketing funnel and targeted with new messages.

For example, if you’re promoting a free eBook and someone downloads it, you shouldn’t spend additional ad budget on displaying your ad to this person again.

Instead, you can create a Facebook Custom Audience of the converted and exclude them from your campaign’s audience. 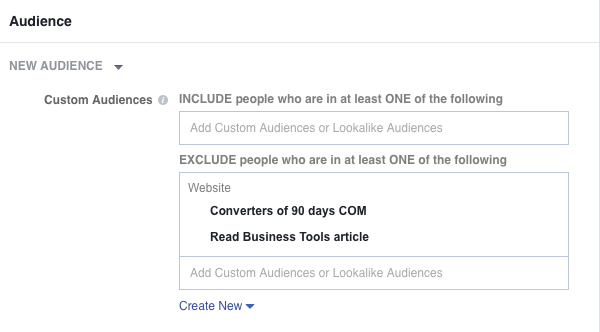 Did you know that you can set up automated optimization rules in Facebook Ads Manager?

This feature is called Facebook Automated Rules. And it’s available for free to anyone advertising on Facebook.

If the rule conditions are satisfied, four things can automatically happen:

… You can turn your focus on brainstorming new campaign ideas.

1. Go to Facebook Ads Manager
2. Select one or multiple campaigns/ad sets/ads
3. Click on the “Edit” icon in the right-hand menu
4. Click on the “Create Rule” button

5. Set up your automated rule’s conditions 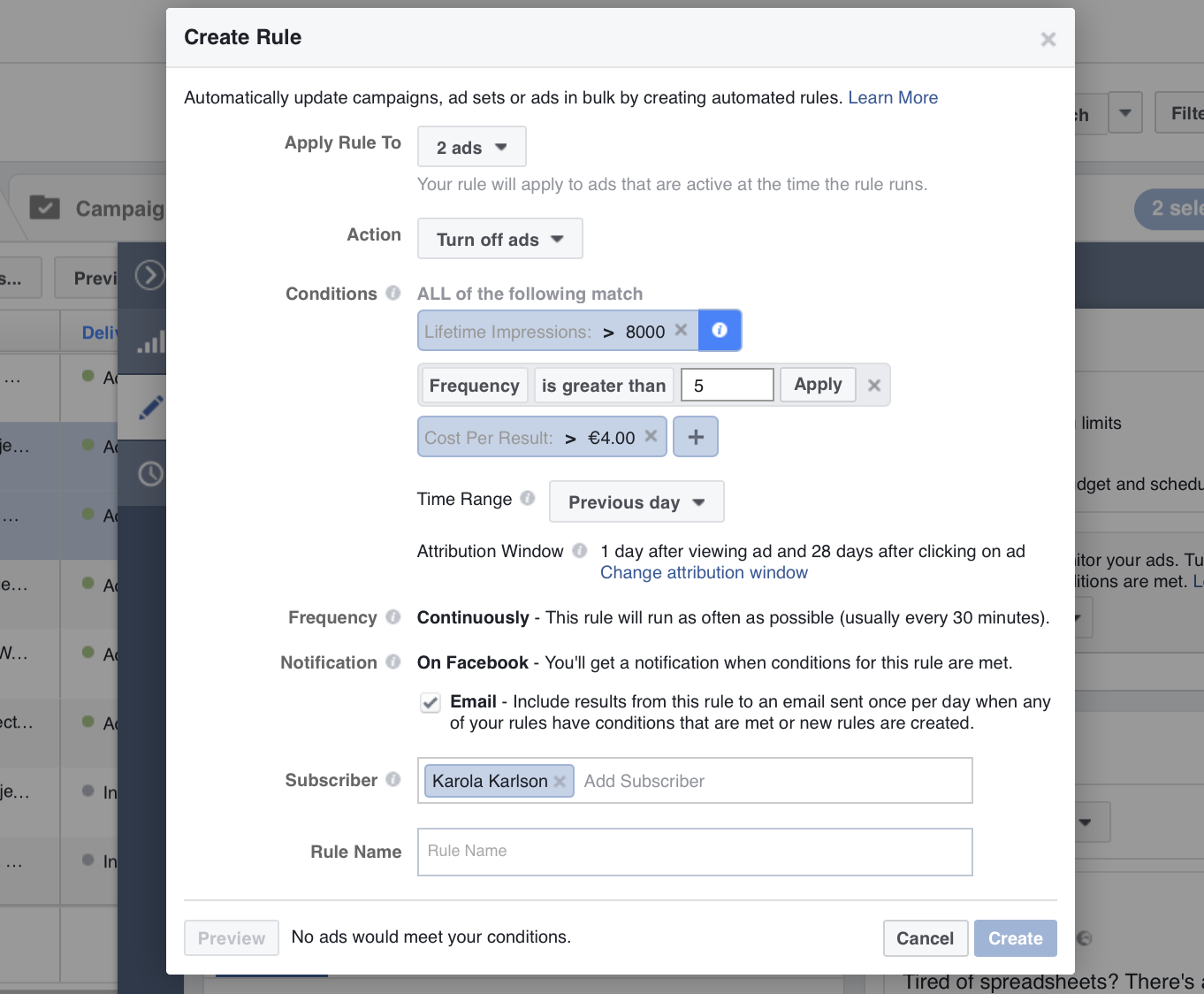 For example, you could tell Facebook to pause any ad that reaches the frequency of 5 ad views. Or lower the bid on ad sets with a high cost-per-result.

I also recommend that you also set up an email notification to receive an overview of the last 24h automated changes to your campaigns.

Facebook ad optimization is a continuous process of trial and error. While it’s not an easy process, it will save you a significant amount of time and resources in the long term.

Here’s a quick overview of Facebook ad optimization tactics discussed in this article: